The Discus of Daedalus (commonly abbreviated to the Disc or known as the Discus)  is a ranged projectile weapon available in 1200.

The Discus of Daedalus when fired, will fly in the direction the player was aiming at. If an enemy is within proximity of the Discus as it is flying outward, then the Disc will home in on the enemy, and if successfully hit, will change its path to return to the player.

If a player is very close to a surface or enemy they will not throw the disk, but will perform a melee strike without throwing the disk. This makes a rapid attack at point blank, due to the fast animation, and without having to wait for the Discus to fly out and back.

The Discus will return to the player if it hits a surface, it hits an enemy, or it flies a set distance.

The Discus when thrown will travel slower underwater, but upon hitting an enemy or surface will return to the player at normal speed as if in air. 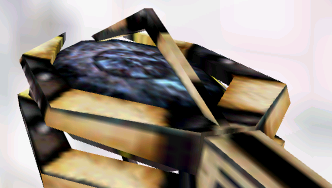 It’s also worth noting that second Discus texture actually has a model, in early screenshots of the game. The much earlier model appears to be pretty closer to Discus of Daedalus’ final model than it was as a disk holder in the Pre-Alpha.

Retrieved from "https://daikatana.fandom.com/wiki/Discus_of_Daedalus?oldid=5078"
Community content is available under CC-BY-SA unless otherwise noted.